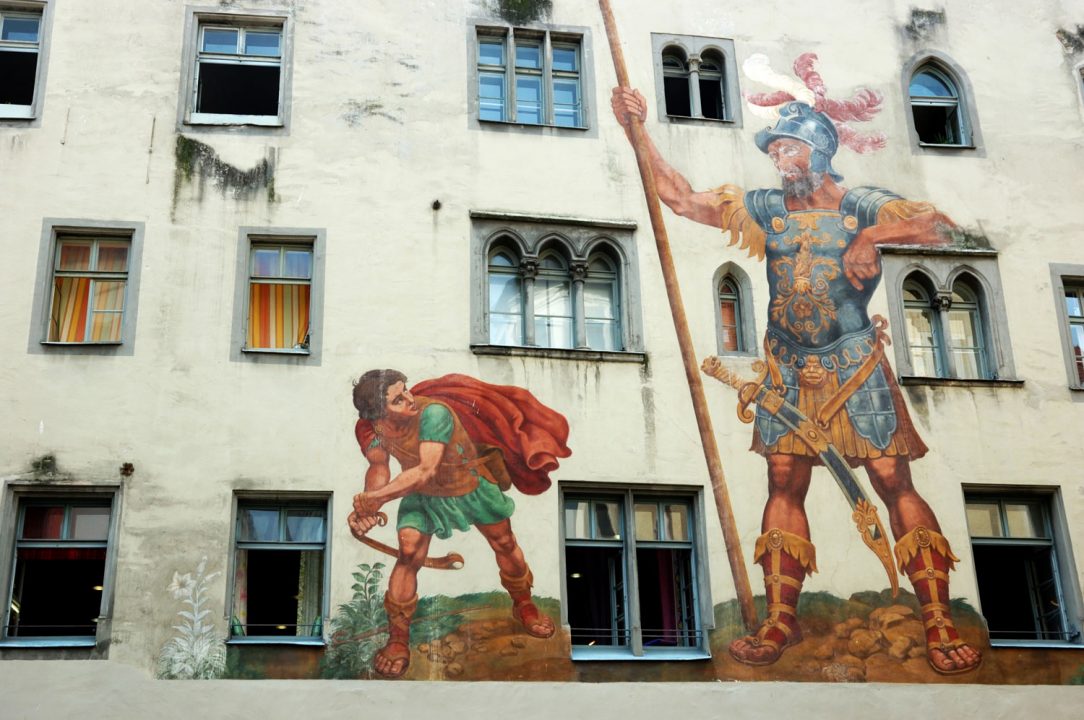 Students often ask me, What are the most difficult books of the Bible to interpret correctly?

The exegetically impenetrable prophets? The future-oriented apocalyptic material? The subtle and elusive poetic books? The perplexing rhetoric of Paul? My answer is the narrative texts of the historical books.

These twelve books—Joshua through Esther in the English canon—cover nearly 1000 years of Jewish history from the Conquest of the Promised Land to the Jewish return to the land of Israel after the Babylonian exile. They are filled by wonderful and compelling and often frustrating accounts of real individuals and nations who lived, fought, ruled, and worshiped centuries before the time of Christ.

And we simply don’t know what to do with them. Do the characters—the kings and commoners and even countries in the stories—present examples for us? Are the stories allegories? Are they moralistic tales? Are they stories about us?

Let’s take one well-known example: the story of David and Goliath from 1 Samuel 17. One of the most well-known stories in the Scriptures, this account of “facing the giant” has inspired stirring movies and moving speeches, football teams and fearless leaders.

Most take it as a story meant to motivate valor against adversaries, whether they be physical, emotional, or spiritual—the so-called “giants in your life.” With this allegorical approach, we are David—the underdog, the unlikely, the overlooked, the oppressed. Goliath represents any in a myriad of enemies. And God is God—who enables us to slay our Goliaths. Some even imagine the sling-shot stone to represent the “smooth rock of faith” or the like.

Now, it is true that God gives us strength in our struggles. This is not theologically wrong. But is that what “this” author is communicating?

To answer this question, we need to examine the literary context.

The books of Samuel in which we find this story have a singular purpose—to highlight King David. Around half of 1 Samuel and all of 2 Samuel deal with this renowned ruler, the king “after God’s own heart.” The reason is that for the author—for better or worse—the fate and spiritual health of the nation is inextricably tied to that of the Davidic king. This truth is born out throughout the historical books. As these Davidic kings go, so goes the nation. And so, the author has his eyes fixed on David.

In addition, in the story of God’s redemption found in the Scriptures, we know why the Bible focuses so much on David. Jesus is from his line. Jesus is the fulfillment of the promises given to David in 2 Samuel 7:8-17. Even for a Jewish person, the term “Messiah” connotes the anointed king in the line of David who fulfills these promises.

So how does the author highlight David in this story?

The emphasis is clear even on the surface, but let’s dive in a little.

Three main characters may be found here—David and Goliath, of course, but also Saul. Goliath is described as tall, strong, and fearsome, a champion of his people. Saul, the first Jewish king, is described similarly—a head taller than most, and as king, he should have been the people’s champion. Indeed, in the ancient Near East, the king was always the one to lead the people into battle, like Mel Gibson in Braveheart or Aragorn in the Lord of the Rings. The king was the one to inspire victory. The king was the one to model faith in God’s enablement.

And yet, where is Saul? Cowering in his tent, in no way acting the part of the king.

Enter David—the opposite of Saul in many ways. He possesses no distinguishing physical or familial traits. Taken from following after the sheep (2 Samuel 7:8), he’s definitely not royal stock. But as demonstrated over and over in Scripture, God uses the weak things of the world to shame the strong (1 Corinthians 1:27-28). What separates this son of Jesse from Saul? David is on the front lines. He is acting as the people’s true champion in the strength of God.

The author’s point? David is the true God-anointed king, not Saul.

So who is David in the story?

Definitely not us. Instead, David is God’s true king, brought into the storyline of Scripture to pave the way for the true Messiah. In other words, the story is not about us and about our struggles with giants, but about Christ, as the victorious Davidic king, who has overcome the world for us. You see, allegory and other Bible study methods make the text self-centered, when it is really God-centered.

So, the next time you encounter the historical books, seek for the authorial intent, and you will find the authoritative message of the Author of Scripture.